VICTORINOX, the Number 1 for Pocket Tools

Basel, Cultural Heart of Switzerland
Basel, the oldest university town in Switzerland, is a markedly open city. It stands at the point where Switzerland, Germany and France meet. These multiple facets influence the artistic and cultural life of the place.

Shop and damn the weather!
The Old Town of Bern, which figures on the UNESCO list of World Cultural Heritage sites has one of the longest "weatherproof" shopping malls in Europe under its six kilometres of covered arcades. The mediaeval atmosphere, with shops in the cellar vaults must be unique. 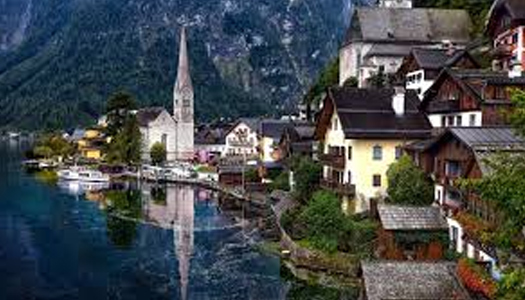 The mini-metropolis with the beating heart
This, the smallest metropolis in the world, is characterised by its international population. They are there for many reasons, from cultural activities to humanitarian commitments. This is also the European HQ of the United Nations and the home of the Red Cross.

In the heart of Watch Valley
World birthplace of watchmaking industry, La Chaux-de-Fonds (38'000 inhabitants) is the only town in Switzerland to be considered as a New Art centre.

A picturesque location right on the lakeside
The geographical location of Lausanne could hardly be more picturesque. This, the Olympic capital, is built on three hills with the Lake of Geneva bathing its feet and a garland of vineyards around its shoulders. Clearly visible are the Alps across the water in which, weather permitting, glistens their reflection - a panorama not to be forgotten.

An historical library by way of a hallmark
This human-sized Eastern Swiss metropolis has a delightful, traffic-free Old Town. Its hallmark is the Cathedral with its Foundation Library containing valuable, partly hand-written documents over a thousand years old. The whole Foundation area was, in 1983, declared a World Cultural Heritage.

The small town with a self-assured worldly outlook
Winterthur is the sort of place where you want to linger because the town has culture and the people enjoy living there. They like to share their own pleasures with their visitors. It is easy to see how this homely yet worldly cultural centre manages to combine the charm of the mediaeval Old Town with Nature and its self-assured worldly outlook.

A throbbing world metropolis with its quiet aspects
The variety of scenery in Zürich will catch you unawares. At times, it will strike you as a rowdy, throbbing major city, at others - especially in the Old Town - you will find the narrow alleys peaceful and leisurely. The Zürich Lake gives you a feeling of well-being.

The gateway to Italianità
Bellinzona appeared to the traveller of old approaching from the South as the key to the Alps while for those approaching it from the North, it was the gateway to Italy. Many modern tourists know the town only because they have passed through it on the way to their holiday resorts on the Mediterranean. But it really is worth making a stop in Bellinzona itself some time.

Chur - the hot spot
Chur, whose history goes back to settlements 5000 years ago, is one of the oldest of Swiss towns. It is also the main town of the Canton of Graubünden and is located between 600m (the town centre) and 1800m (the "Fürhörnli") above sea level. Here you can combine the southern charm of our town with the fresh air of the Engadine Alps.

A fascinating remnant of the Middle Ages
Fribourg Old Town is considered one of the finest remnants of mediaeval architecture in Europe. It is built on rock and water. The town is a favourite meeting venue but it also has many leisure activities to offer such as its countless festivals, for example.

Enchanting Locarno
With 2300 hours of sunshine per year and a lush subtropical vegetation, Locarno is known as the Swiss town with the mildest climate. It is also a highly attractive place, especially at night, when the arcades and portici take on a dreamlike quality, when soft tunes are seeping out of neighbouring bars, and reflecting lights are dancing on the lake.

Lugano - a place to sun your soul
The 'capita morale', the secret capital is not only the third-largest financial hub in Switzerland, a congress, banking and business centre, but is also a city of parks and flowers, of villas and religious buildings. Its Mediterranean flair, full of southern joie de vivre, means that Lugano combines all the advantages of a world city with the character of a small town.

The pearls on the Swiss Riviera
There are 15 km of lakeside to stroll along, snow-capped mountains, a lake with steamships plying up and down, and hotels with the charm of the Belle Epoque - such is the Riviera on Lake Geneva where many international stars, such as Barbara Hendricks, live.

Neuchâtel, a Swiss-French town with many charms
Neuchâtel is located on the largest lake that is entirely Swiss. The town is a capital of watchmaking and would, under other circumstances, be famous for that alone.

Sion-Sierre
Vineyards and castles are key features of Sierre and Sion. With the towers of the ruined castle of Tourbillon and fortified church of Notre Dame de Valère rising skyward, Sion is recognisable from afar. Here, in the bilingual capital of the canton of Valais the past and the future blend together seamlessly. Boasting an international airport as well as good railway and postbus connections, Sion is regarded as one of Switzerland's main hubs. The old town, castles and museums bear testimony to bygone times.

The small town with world-class culture
Solothurn is one of those towns where quality certainly has the edge on quantity. Its Old Town is one of the finest in Switzerland and its has a culture whose fame spreads far beyond its region. Several of its cultural highlights are spread over the whole year such as its renowned Film and Literature Days and its Classic Open-air Concerts with world-class voices.

There were already baths here in Roman times
Baden has been known as a vivacious spa town ever since Roman times. The richest mineral water in Switzerland gushes out of 19 springs at a comfortable 47°C. Even young people have discovered what fun it is to come and relax in the steaming open-air thermal pools here.

This is where they speak German ... or French
Biel - or Bienne, in French - is the only town in the whole of Switzerland where both German and French are spoken on an equal footing. For example, all the street names are given in both languages. Here you will notice the easy-going attitude that comes from the mixture of two languages.

Brig - central to the Valais region and worth an excursion
Located in the heart of the Valais, Brig is also an important crossroads for international connections. The small town is steeped in history and gladly shares its many treasures with visiting guests. Don't miss the magnificent Stockalper castle and the stately homes of former noblemen, nor the cozy inns and hotels that account for much of its charm.

Lucerne - where festivals come to life in a picture-book setting
Centrally located, Lucerne is easy to reach. Once you've arrived, you may want to linger in the picturesque old town, which is car-free and small enough to be explored on foot. Don't forget to stop for a cup of coffee and marvel at the famous covered bridge, the "Kapellbrücke," that spans the Reuss river.

Martigny - a historic and cultural gem
Celtic tribes, the Romans and Napoleon's troupes all felt at home in Martigny. These different people left their mark on the town and various archeological sites offer a fascinating glimpse of the early settlements. In addition to its historic dimension, Martigny is also a town of the arts.

The biggest waterfall in Europe is nearby
"Munot", the impressive mediaeval fortress towers over Schaffhausen Old Town. The houses in the Old Town are richly adorned with bow windows and expensively painted house-fronts. The narrow alleys invite you to stroll, shop and sit around.

Culture in an impressive mountain setting
The impressive Castle and historical Old Town, the lake baths, the promenades and the Alps in the background set the tone for the tenth biggest Swiss town. Markets, exhibitions, concerts and festivals are all held in Thun. The former Selve factory complex now offers entertainment for all tastes and every age.

Vaduz - the capital of Liechtenstein is well equipped and well liked
Little Liechtenstein has roughly 5,100 inhabitants. Its capital, Vaduz, is the seat of the government and the parliament and, since 1939, residency to His Highness, the prince and his family. The town was first mentioned in a document dating from 1150.

Please Enter your Details to Fill this Booking Form